Stating the obvious here, but it’s fair to say that Saturday was not a warm day. I went for a run across the marshes in the morning, it was blustery and more than a little bleak. I’m pretty sure Heathcliff and Cathy would have felt right at home. Around lunchtime I tried to persuade the dog to go for a walk, but nothing would get him to St James Park. He got outside the front door, shivered, turned, and went back in to the house. So, with the dog refusing to leave the sofa, and my other half at work, I found myself with not much to do. I toyed with the idea of getting one of the slightly desiccated mince pies out of the cupboard, and settling down to watch Judge Rinder on ITV. Sadly, the mince pie had pretty much turned to dust, so I decided to go out. I made one last attempt to rally the dog, but he made no effort to move, so I headed out in to the grey afternoon on my lonesome. I walked up Queens Road, crossed Hoe Street and made a bee-line for Mothers Ruin, not because I was hitting the gin early, but because I was off to visit Perky Blenders. 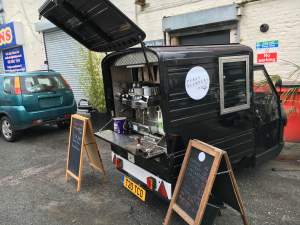 Set up towards the end of 2015, Perky Blenders is a relatively new local business. Run by a chap called Tom, Perky Blenders roast coffee and create their own blends right here in E17. They also offer free home delivery with their letter box coffee subscription scheme, and operate a small coffee van, which this weekend was parked up outside Mothers Ruin. Tom, who is originally from Wales, moved to Walthamstow seven months ago and fell in love with the place. He worked at Nude Espresso near Brick Lane for a while, and then set up his own business. Along with his retail operation and planned coffee clubs, Tom also intends to bring Perky Blenders to St James Street Station. He still has a bit of organising to do, but in the very near future, the van will be parked up near the florist by the station doors. This is my local station, so I am more than a little excited that I will be able to get a warm drink to accompany me on my commute.

Baring in mind that Tom was stood outside on a drizzle filled February day, he was extremely cheerful and chatty when I went to visit. He knows a lot about coffee. He spoke with enthusiasm and passion as he told me about the business so far and his plans for the future. It’s taken him a bit longer than expected to get the pitch at St James Street sorted out, be he reckons he’s nearly there with that. He’s clearly done his research, checking when other local cafes open to ensure he’s not going to step on any ones toes. All going well, he may also get another van and pitch up at Blackhorse Road, though that’s a way off yet. Considering Perky Blenders have only been up and running for a short time, they seem to be doing pretty well. They are already supplying coffee to Froth & Rind and Indulgence on Hoe Street, and plans are afoot for something exciting on Wood Street.

As we chatted he asked if I wanted a drink, I don’t drink that much coffee normally, but you know, when in Rome. He rustled up a flat white for me, which, as far as I could tell was a really good. I’ve had some bad experiences with coffee in the past, but this one was very smooth and just what I needed on a cold day. Coffees range in price from £2.00 for an espresso to £3.00 for a Mocha, my flat white was £2.50. Bags of coffee cost £6.00 and you can also get a tea for £1.50, which is good news for me as I am a confirmed tea-a-holic.

I reckon Perky Blenders are one to watch, Tom is only a young lad (I realise I sound like my dad) but he seems very focused on what he wants to achieve. I’ve read loads of good stuff on social media about the delivery service, and I’m sure he will make a killing when he arrives at St James Street Station. If you would like to know more about Perky Blenders, check their website. As for me, I’m off to the kitchen to try to figure out how the coffee machine works, I could be some time.