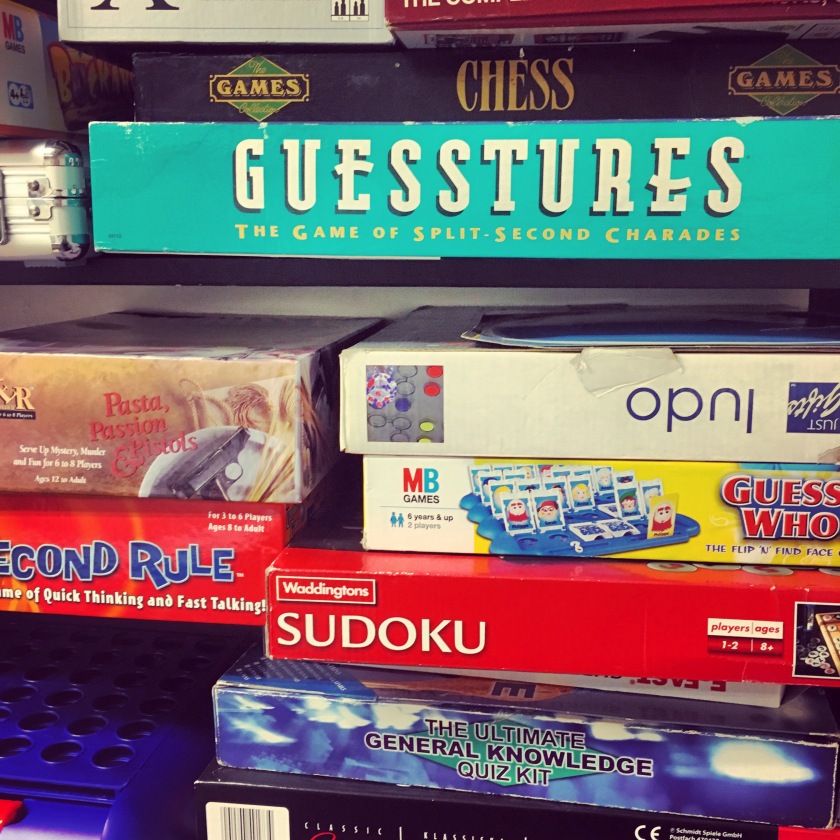 Some would say that the Four Horsemen will indicate the start of the apocalypse, I think it will be something much simpler that brings about the end of civilisation as we know it. A game of monopoly, that’s how I think it will start, a game of angst ridden monopoly will signal the beginning of the end. Thankfully, I won’t be to blame because I’m not allowed to play monopoly anymore, it makes me too angry. I loose all sense of reality, I argue about how many houses you can have before you can build a hotel, and sulk if someone buys the Old Kent Road before me. A deep grump settles on me as the game goes on, and on, and on, until eventually I start cheating to try and make it all stop, which then makes everyone else angry. Actually, I’m not sure it’s just monopoly that turns me in to a stroppy brat. I definitely remember having a strop one Christmas when paying trivial pursuit because I couldn’t hum the Archers theme tune, and I once stopped talking to a friend for months following a pretty disastrous session of hungry hippos. Taking all this in to account, you’d think visiting a board game cafe would be a terrible idea wouldn’t you? But visit I did, and I didn’t have to go very far to do it.

Boards, the board game cafe, is tucked away down the back of the Georgian Village on Wood Street. It’s not a massive space, but it has three big tables, and a great selection of board games stacked on the shelves in the corner. There’s also table football, and air hockey, though I’m not allowed to play that either after having a meltdown at a air hockey table on holiday a few years ago. There’s a food counter at one end of the room, and at the other, a board game themed mural covers the wall. Now then, brace your self, because you may react badly to what I’m going to tell you, much of the food on offer is, well, cereal, that’s right, breakfast cereal (pregnant pause then lots of mutterings about hipsters). If you are so inclined, you can browse the boxes of cereal on offer, and then enjoy a bowl of cornflakes, or perhaps a side order of coco pops as you play jenga. That’s right, Walthamstow has a cafe where you can play games and eat cereal, I realise some may not take this news well, but I’m also sure the world will keep on turning, unless of course someone plays that game of monopoly.

We didn’t partake in the cereal as we planned to pop in to Brothers Fish Bar for chips on the way home. We did partake in a cuppa, and played various games, which despite my track record with board games, didn’t end in disaster. We stared with a game of downfall, then played buckaroo, with just a minor disagreement about what happens if a player knocks something off. Several rounds of connect four proved that after all these years, I am still really rubbish at connect four. We finished with a loser buys the chips round of guess who, which I think I won, though that’s still in dispute. I could see the monopoly board sitting on the shelves, and I was tempted to suggest a game, but as monopoly lasts longer than test match cricket, we sensibly decided to give it a miss.

Here’s how boards works, you pay a fiver each for unlimited play, then pay for food and drink on top. I assume that if you did go postal during a game of trivial pursuit, you would also have to pay for any breakages. Despite my tendency to react badly to board games, we actually had fun at boards. I think it’s the kind of the place that the more of you there are, the more fun it probably is. I reckon if you were in there with a group of mates, you’d probably have a cracking time. I’ll be honest, I didn’t think this would be my kind of thing, so was pleasantly surprised to find myself enjoying it. Boards is open Tuesday to Saturday 10am – 10pm, so there’s lots of time to go and have a play. Happy gaming, and remember to play nicely.