Now that the tube has WiFi the journey home is a great time to catch up with what’s been happening on social media. Last Thursday I was checking my twitter feed, trying my best to ignore the arm pit that was swaying dangerously close to my face, when I spotted a tweet about Soul Picnic in Lloyd Park. I opened up the image that was attached to the tweet and two words instantly grabbed my attention, those magic words were “Thai Food”.  As I read the other information on the flyer, another commuter squeezed on to the carriage and the arm pit along with its owner moved a little bit closer to me. Standing in the hot tube carriage trying to avoid being stood on by the man next to me, the thought of spending an afternoon in the park at this event felt like the perfect remedy to a busy week at work. 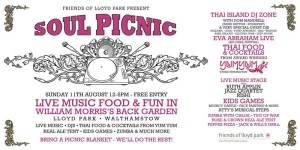 We arrived not long after the event started and headed straight for the all important food tent. I should explain that I’m running a fair bit at the moment to train for a few races so I’m generally always thinking about food. The Thai food that I had been determined on eating since I read about the event on Thursday was provided by yum yum from Stoke Newington. We bought a couple of mixed plates for a fiver each and two mojitos, settled down on the grass near the DJ and watched the world go by. The event was organised by the Friends of Lloyd Park and it felt like the perfect way to spend a sunny Sunday afternoon.  As well as the DJ there was a face painting tent, live music and the all important beer tent which was provided by the Rose & Crown pub.

After a relaxing few hours at the Soul Picnic we decided to head home, grabbing an ice cream to eat on the way. We walked past the skate park and cafe, both of which were bustling with activity and headed back towards the William Morris Gallery.  As we strolled through the park, which opened in 1900, it was great to see so many different groups using it. Skaters, tennis players, sun bathers, runners and dog walkers were all making the most of this beautiful open space. And it really is beautiful, from the island in the middle of the park the house looks stunning and almost rural.

The final treat Lloyd Park had in store for us was the ELMO bus which is parked in the front of the museum. ELMO is the East London Mobile Workshop, a year-long programme delivering free workshops from a converted Bedford bus. ELMO are based at the gallery until 18th August and are offering workshops in bookbinding and printing techniques such as screen printing. There was a real buzz around the ELMO bus a local kids got involved and started making and printing. It wasn’t just the ELMO bus that had a buzz around it this afternoon it was the entire park. Between the newly restored gallery and the events that are organised by Friends of Lloyd Park, this lovely old house and strip of green in the heart of Walthamstow has so much to offer and E17 is all the better for having it. 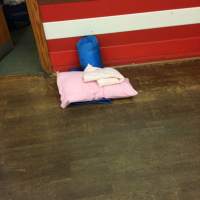